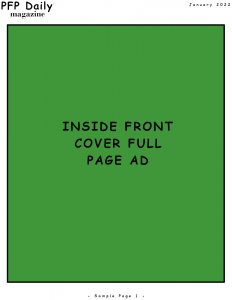 For this first time ever (possibly, we couldn’t find another example), PFP Daily has released 70 NFT’s representing advertising space in the magazine.

“Traditional ways of selling items like magazine advertising may be coming to an end. With NFT’s, if you can imagine it, you can sell it. This is just the first step towards a larger purpose and goal.”

Essentially a three month contract on the blockchain, buyers of the NFT’s have the right to advertise in the magazine for January, February, and March. Ad units are priced on industry standards based on the projected cume (total) of readers over the course of an entire year – as once uploaded, the issues remain on the Internet. To make the NFT even more affordable, all transactions are based in Ethereum.

Interestingly, as an NFT, the buyer has the right to list their NFT for resale and potentially take advantage of the limited supply. Once again, this could never be done in the “traditional” real world of magazine publishing.

How does it work? The NFT is unlockable, meaning that the buyer receives a special web address to visit along with a password to enter. From there they are able to verify their ownership of the NFT on the blockchain and can upload their ad.

In addition, we are giving away perks to several lucky NFT owners such as:

But what happens if the NFT’s don’t sell out? Good question. By December 10th any unsold inventory will be updated for the following months. This is because all ads must be submitted by Dec. 15th in order to make publication according to the smart contract listed as part of the NFT.

The magazine will be placed on PFPDaily.com as a flipbook and released on various channels and apps.

Owners who become advertisers in the magazine (and don’t flip the NFT) will receive an airdropped special commemorative NFT of the Magazine cover marking the first ever Advertising and true Magazine in the space.